A life under the Pink Umbrella!

The Pink Umbrella Girl > At Home 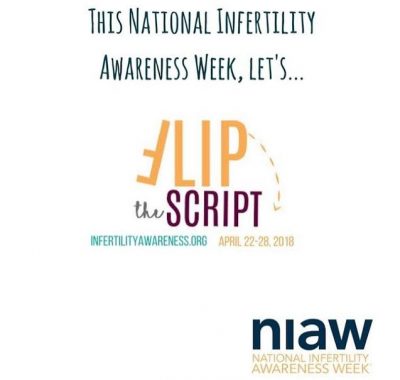 I felt moved to talk about my infertility journey this year because the theme for NIAW 2018 is “Flip the Script” or to Change the conversation about infertility. I am choosing to share my story in hopes of washing away the stigma and silence that many women experience, including myself.

Before I started my journey over four years ago-I was naïve about fertility in general and its importance in starting a family and the problems that some women experience. Infertility can be an isolating condition to a lot of women and couples and unfortunately there is a lot of stigma still associated with it. A large part about the stigma with infertility is education. A lot of people don’t understand what it is, who is affected by it, how to react to someone’s diagnosis, and what the person or couple affected by it is experiencing.

Just how common is infertility? I wish I could say that it was a 1 in a million, condition-but the odds are closer to 1 in 8 couples! 1 in 8 couples (or 12% of married women) have trouble getting pregnant or sustaining a pregnancy. (2006-2010 National Survey of Family Growth, CDC) (https://resolve.org/infertility-101/what-is-infertility/fast-facts/)

What is infertility? Infertility is defined as by The International Committee for Monitoring Assisted Reproductive Technologies (ICMART), is a disease characterized by the failure to establish a clinical pregnancy after 12 months of regular, unprotected sexual intercourse or due to an impairment of a person’s capacity to reproduce either as an individual or with his/her  partner.(https://resolve.org/infertility-101/what-is-infertility/)

Things that I have learned about infertility: 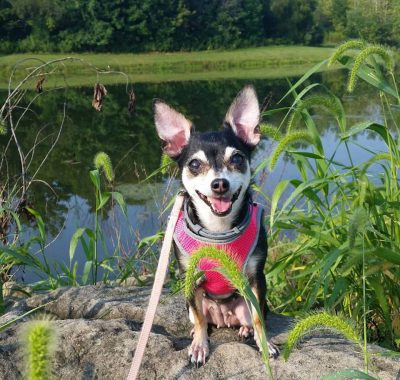 Pepper, my Chihuahua came into my life 13 years ago at 7 weeks of age. She has been with me through so much of my life-it’s hard to think of a time when she wasn’t. Pepper was by my side for while I finished my Bachelor’s degree helping me study, all my crazy work schedules, a breakup, meeting my husband, she even played a huge role of my engagement (she wore the ring first!), getting married, moving three times that included relocating my Florida dog to snowy winters and lots of car rides including visiting over 10 states!

While there are countless great memories with her; June 9th, 2013 was a day that would make me appreciate them more than ever! My husband and I woke up on that Sunday morning much like other weekend mornings with Pepper snuggled in between us sleeping peacefully. That morning I picked her up and noticed something was different about my loving and playful Chihuahua-she seemed lethargic and almost limp in my arms. I sat up and tried to get her to stand up and she would immediately fall over and was not able to support her weight. I sprang out of bed with her and tried again for her to stand-this time on the floor and again she would fall over. I also noticed that she was having seizures-her whole body would shake a few times hard and then stop.  Through tears I phoned my mom for advice and she told me to immediately take her to an emergency veterinary office.

Upon arrival to the veterinary medical hospital-my husband and I told the veterinarian Pepper’s symptoms and went over her diet, veterinary care, food intake and habits. An assistant began timing Pepper’s seizures and took her back for a full body examination including blood work and a full body x-ray. Meanwhile I was frantic because I saw dollar signs-but was so scared for my dog and didn’t want her in pain! My husband was so supportive and understanding and said that we would not spare any expense in taking care of Pepper and for the veterinary office to continue with what they felt was in best interest of her medical needs. I am still thankful for my husband’s calmness in Pepper’s storm! We met with the veterinary doctor who said that there were no blockages seen in the x-ray and were continuing additional blood tests and they would keep her in the hospital and monitor her there with an IV for fluids and care. It was hard to go home without her but knew that she was still alive because of their quick thinking and great care.

The next day the emergency veterinary hospital called to talk to us about blood test results for Addison’s Disease. Addison’s Disease also known as primary adrenal insufficiency and hypoadrenocorticism, is a genetic condition not only in dogs but also surprisingly can occur in humans as well. This long-term condition that is not able to be cured but only treated and happens when the adrenal glands do not produce enough hormones for the body to live. When there is a deficiency of hormones symptoms such as overall weakness, muscle weakness, low blood pressure, dehydration, weak pulse, collapse, lack of appetite, low temperature, shaking, blood in feces, diarrhea, vomiting and depression.  Addison’s Disease can be a very tricky diagnosis also because the symptoms could also be symptoms of many other conditions and a blood test along with a knowledgeable veterinary office is imperative for making sure the diagnosis is correct!

Pepper was given an initial hormone replacement and the veterinary office calculated dosage for her age, weight and blood test results that would include an injection in the form of Percorten once every 28 days for the remainder of her life. Additionally, she would require Prednisone medicine daily by mouth to main the hormone medicine injection. My husband and I were so thankful that she survived, and we began to learn about her condition and her care moving forward.

The most important thing I learned about Addison’s Disease care was that it required good owner compliance to ensure medications are given on a timely schedule as without hormone replacement can cause the dog to lapse into another crisis that is no fault other than the owner.

While there are additional costs for Pepper’s care, including a monthly office visit for her hormone replacement injection and daily medication-it was well worth it to know that she had a manageable condition and lots of love in the future! With proper veterinary treatment and home care Pepper has thrived with Addison’s Disease and has completely returned to my playful sweet dog!

What I have learned about caring for an Addison’s dog-

-Get to know and trust your veterinary office  (preferably one that is known to treat Addison’s Disease) as you will see them monthly for injections.

-Give veterinary phone numbers, medication schedules and dosages to animal caregivers for care and in case of emergency.

-Monitor the dog’s day to day stress to a minimum as major upsets can affect the dog’s  immune system.

-Immune system can be more fragile due to diagnosis-keep diet, vaccinations and care consistent to help avoid additional illness.

-Request blood tests every 6 months for up to one year after diagnosis to ensure dosage is correct for hormone replacement. Additionally request blood tests prior to any surgery or tooth cleaning to ensure the dog will be healthy prior to undergoing a procedure that could alter hormone levels in their body.

-Reach out on Social Media and online- I found a great group on Facebook called C.A.R.E (Canine Addison’s Resource and Education) Website is https://canineaddisons.org/dogs/ I honestly can’t say enough about this amazing group and site! C.A.R.E. is helpful in so many ways for questions about care, medicine dosage and comfort knowing that you are not alone in caring for your dog!